Buena Park School District Prepares for Battle of the Books 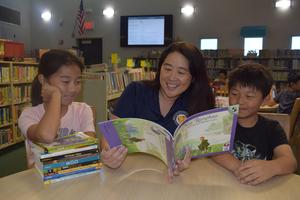 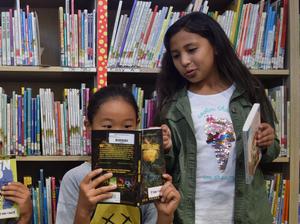 Buena Park School District students are memorizing plot lines, devouring books and sharing literary tidbits as they prepare for their District’s annual Battle of the Books, a competition where students answer trivia questions about novels.

The Battle of the Books has pitted the most well-read third and fourth grade District students against each other for the last two years. It started as a club for Beatty School’s fourth through sixth grade avid readers during the 2012-13 school year by Gifted and Talented Education (GATE) fourth grade teacher Esther Lee and Librarian Kelly Bone to promote literacy and encourage teamwork skills.

Each year, participants read and memorize as much information as they can from 10-12 preselected books. Each school starts out with about 10-30 participants, who are narrowed down to the four most knowledgeable bibliophiles to participate in a District-wide tournament in March.

“Winners of the Battle of the Books don’t compete for prizes – they compete for pride and that helps them become lifelong readers,” Lee said. “I’ve noticed that former tournament participants are more likely to light up during reading lessons because this competition really instills a love of reading in them.”

Since the program’s inception, Lee has used computer applications such as Edmodo and Canvas to allow students to create their own trivia questions, communicate with other students and review book details. Lee said the use of technology has led to increased student recall for even obscure book facts. Lee also enlisted the help of GATE third grade teacher Tai Lew to assist with organizing the program when it became available to the entire District.

Beatty School fourth-grader Eugene K., who is participating in the Battle of the Books for the second time, said she loves reading and plans on finishing all 12 assigned books this year. In fact, she has already finished “Alvin Ho: Allergic to Girls, School, and Other Scary Things” by Lenore Look.

091819_BUENAPARK_BOOKS2: Beatty School third-grader Giselle M. points out an exciting passage in “Earthquake Terror” by Peg Kehret to fourth-grader Chaemin P. Giselle M. and Chaemin P. are both gearing up for the Battle of the Books, a competition where students answer trivia questions about novels.